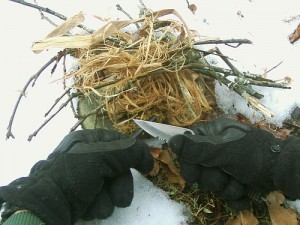 Years ago, one of the required readings in school was “To Build a Fire” by Jack London. This poignant story tells of an inexperienced man traveling alone in the Yukon, with only his dog as a companion. After falling through ice and into frigid water, he emerged and began his battle with hypothermia. Although he succeeded in starting a fire, it was built under a snow laden tree and the resulting heat caused the snow above it to fall and extinguish it. He continued to shake violently from the cold and could only use his teeth to strike a match. However, his hands were so cold that he could not feel them and lost control over the fire and it went out, resulting in his death.

Many folks who are reading this grew up in snow country and have learned to prepare and adjust to the extreme cold. But there are many more who have not experienced the effects of hypothermia such as violent shaking and reduction of motor functions. This leads me to suggest that it would be beneficial to familiarize yourself with frigid conditions in a safe and controlled environment in order to gain this valuable experience and knowledge. If you don’t live in snow country, try stepping outside some early morning and hose yourself off, clothes and all. See how long it takes to begin shivering and try to perform survival tasks. Wear gloves and see how it effects your dexterity. How well do you function when using a striker bar, or when striking a lighter, or when opening a pocket knife? Perhaps your tool selection might change if you experience difficulty in the process.

Hypothermic conditions are magnified when you are wet and exposed to the elements, so remember to stay dry and insulated. And if you’re starting a fire, build it on a dry surface. It helps to light an intermediate short-term fuel like a candle or a tire inner-tube strip to provide heat while the tinder that surrounds it dries enough to sustain a fire.

Any comments offered from actual experiences are most welcome. They could prove to be invaluable to our readers.