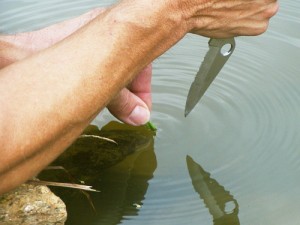 When I was in my early teens my Grandparents invited my family to join them for a vacation at Borde Du Lac Resort on Lake Benedict, Minnesota. My Grandfather was well known for catching his limit of Northern Pike that he accomplished by trolling around the lake in the early morning or late evening. However, I looked for ways to fill the day in between these outings.

It happened to be the time of year when Mayflies were emerging and the screens that covered the windows and doors of each cabin were loaded with these amazing insects. I decided to grab some as they perched with their wings folded up which provided ready handles for the plucking. I walked down to the dock and would throw them onto the water with great force so that they would stick to the surface. In short order, the fish beneath the dock would venture out and snatch the offering of bait. I continued to collect more Mayflies and the fish population increased, becoming more aggressive and competitive in feeding.

Eventually, using one hand, I just held a Mayfly on the water’s surface and let it struggle. With the other hand I held my pocket knife. The fish couldn’t resist this morsel, and as it surfaced to take the bait, I struck it with my knife, and voilà! my first fish meal without a reel. Needless to say, use caution when handling your knife, and when striking your fish.

One thought on “Knife Fishing”