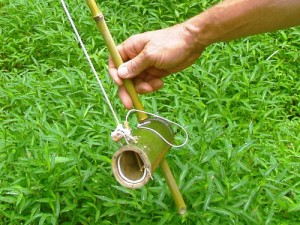 The first time that I saw this type of trap was on the reality program show Survivor during it’s first season. The contestant Greg explained the operation of the trap and was successful in acquiring the first rats for consumption by the tribe. Once they got past the “rodent” concept, they readily welcomed the meat.

This trap is traditionally made with bamboo but can easily be made out of alternate materials such as saplings and tin cans. The trap consists of a hollow bamboo tube, a springy branch with cord and toggle, a small cord anchor loop, a large cord snare loop, and a tethered trigger stick. When the toggle is threaded through the snare loop, and is held down by the anchor loop and trigger stick, the snare loop is positioned inside the bamboo tube by the opening. When the rodent sticks it’s head into the tube and sets off the trigger stick, the snare loop tightens around the neck of the rodent and pins it against the roof of the tube.

As usual, several traps are set out to increase the chances of success. The branch extends through the tube and is driven into the ground to keep it in place, thus preventing it from being dragged away from a struggling animal. In the end, a rodent is probably the easiest catch and is the most plentiful. For non-emergency use, it can rid your premises from unwanted pests.