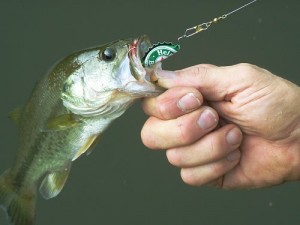 Bottle cap lures have created quite a stir among enthusiastic fishermen. This creative innovation has become quite popular and can be found in many sports stores. Part of the appeal of bottle caps is the wide pallet of colors and color combinations that can be used. There are a number of on-line videos that show viewers how they can construct their own. As I reviewed them, it struck me that most methods seemed like a commercially produced lure that employed split rings, treble hooks, swivels, BBs and more. I chose to create a more simple version that didn’t require such a large supply of specialized parts and could be constructed quickly and easily in the field.

A trademark of survival is simplicity, and I like to ask the practical question “what can you do with what you have?”. In my tackle box I usually have a 2/0 offset shank hook that I use to make a worm or lizard jig. The shank is long enough to accommodate a bent cap. Admittedly I carry a leatherman multitool that is a tremendous help in crafting things, but the lure can still be created with other items that can be used for bending or hammering. I simply put some small stones inside a bent cap and closed it around the hook shank. I found it helpful to offset the halves so that one edge tucked under the other for a more secure container for the stones. The purpose of the stones is to make a rattling sound that many fishermen believe attract fish. I also bent up the end of the cap at the top of the shank so that it would not slide down toward the hook end, thus giving the hook better exposure for a more secure catch. As it happens, I often use a swiveled clip to fasten my lures, so this was already in place.

Sure enough, it works! I highly recommend that you give it a try, and have fun trying different colors too!