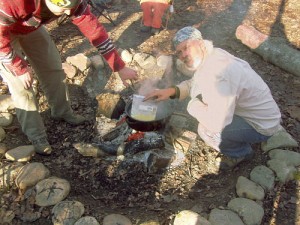 I was invited to teach a class at the Rugged Spirituality event at Uplands Reach Conference Center today. I arrived a little early and was welcomed by the group as they were preparing breakfast in the camping area. They were making omelets in plastic bags by combining 2 eggs, cheese, cooked sausage and tater tots. Once all the air has been expelled from the bag, it is sealed and suspended in a pot of boiling water until cooked. The first person to begin cooking had selected just eggs and cheese and accomplished a textbook omelet. The next campers loaded up the bags with the works and it took quite awhile to cook it’s contents. It turned out that the sausages and tater tots where still frozen and inhibited the quick cook time. This reminded me of my cooler cooking experience. When preparing food, it’s best to add room temp contents for faster cooking.

After breakfast we began discussing survival basics such as the rule of 3s and survival priorities. Then we discussed edible plants, finding direction and shelters. Of course, we ended up with firecraft and we discussed the fire making categories of friction, percussion, optical and electrical. I used a broken headlamp to start a fire by the solar method. Then I showed how to use fine steel wool with a 9 volt battery to start a fire and everyone had a chance to try it for themselves. Then I showed how to use steel wool instead of charcloth to catch a spark using flint and steel, and in the end I demonstrated fire by friction using the bow and spindle method.

Recently I acquired some basswood and it is now my new best friend for fire by friction. In the last couple of weeks I’ve been able to guide several folks in accomplishing their first successful fire by friction by bow and spindle. It is such a delight to see the joy of their success. Such was the case this morning where 4 guys made their first bow and spindle fires and a young lad made his first flint and steel fire.

The program director, Matthew McNiel showed me a fire piston that he had made out of inexpensive hardware, so now it’s on my “to-do” list to accomplish. As we concluded our time, Matthew began to envision next year’s programs in which I may be able to participate. It was a great day with prospects of a great future.