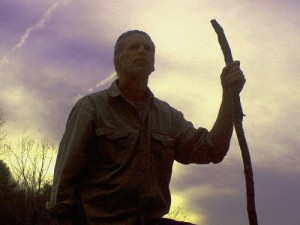 I suppose that the icon of a hiker would include a walking stick. I used to think that they were a bother until I spent some time in the hills and learned about their value. They are both an aid and a tool. The following are some ways that they can be used…

– As a support: It stabilizes you as you ascend or descend. It also provides relief from weight on an injured foot or leg as you walk.

– As an extension: You can reach high for fruit or nuts in a tree or extend it out as an assist when helping someone up a hillside or river bank.

– As a weapon: A deterrent to both man and beast. It can be used either to poke or strike and in the cases of snakes, to pin down or re-direct if needed.

– As a compass: It can be used in the “shadow stick” method. On a sunny day post the stick upright in the ground and place a stone at the tip of the stick’s shadow every 15 minutes. The stones will line up in an West-to-East line.

– As an estimating tool: Used to reference the distance or height and transfer it to the adjoining ground so that it can be measured. See the article “Stick Method for Width and Height Estimation”

– As a scepter: for those who are endowed with a robust self image.

You may have seen these sticks on the trail or at events adorned with stickers, buttons, ribbons, carvings, wrist straps, compasses or whistles. There’s no limit on ways to customize them, but woe to the person who forgets it behind on the trail. As for me, a simple stick will do.

2 thoughts on “Walking Sticks and Staffs”