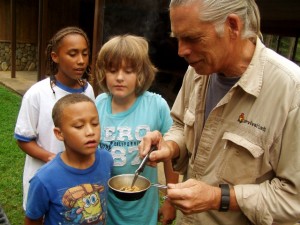 Until recently the “edibles” portion of my classes have centered around local indigenous plants. For some folks this holds great interest, but for others, they patiently wait through the lecture and stir a little when going on an outdoor identification hike.

Recently I had the opportunity to teach a combined class of Cub Scouts and Boy Scouts filled with bright kids who came packaged with a short attention span. Being able to handle different plants and taste them did help to keep them focused. But what drew the most attention was when I took out a container of mealworms and announced that I would be cooking some for everyone to eat.

I used a small wood burning trail stove for my fire source and heated a bit of cooking oil in a Sierra Cup. while I prepared the stove, the Scouts separated the mealworms from the cornmeal that they come packaged in. when the oil got hot as evidenced by the wavy/watery appearance, I dropped the mealworms in that produced quite a crackling sound that drew everyone’s attention. After a short time they began to brown and I let them cool a little before offering them to the Scouts and their parents. To my delight, after first sampling a few myself, almost everyone clambered for their own to taste. The consensus was that they taste a lot like pork rinds which is a familiar taste to this group who grew up amidst the Southern cuisine. I heard one parent say “most people don’t realize how many mealworms they have eaten that were inadvertently included in their corn bread over the years.

In an emergency situation, you can eat bugs raw, but if at all possible, I recommend roasting or frying them first to kill any potential parasites or bacteria. You might be surprised to know that 1/3 of the world’s population include insects in their diet, so you can see that mealworms are a viable food source.