I met a fellow who shared memories of his training days at Fort Bragg NC dating several decades ago. He said that in those days “C rations” (vs. MREs) were the standard food issued for field training and that “#10″ food cans could always be found. These cans were used in a myriad of ways. 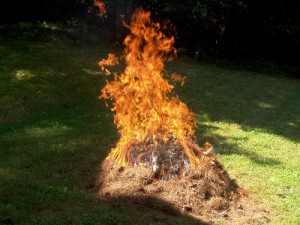 One use was to “flash cook” small game that they would acquire in the field. He described how they would drive a stake into the ground that had a notch at the top. They would sharpen a stick whose length was slightly less than the diameter of the can, and skewer the small game at one end and slide it over the stake where the stick would rest in the grove, thus suspending the meat. Then they inverted the can (open side down) and covered the small game that would hover a slight distance off the ground. Then they would pile dry pine needles on top of this reaching about 4 feet high and light it on fire. He said that the flames erupted into an inferno and took only about 5 minutes to burn down completely whereupon they would uncover the meat which was partially blackened on the outside but thoroughly cooked. 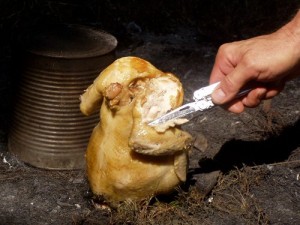 My initial effort to test this cooking method fell short of achieving the same results. It was quite obvious that my pine needles held too much moisture and was closer to a smoulder that a flash. the chicken that I used had more mass than a squirrel or rabbit. A Cornish game hen may have been a better choice. So, next time I will make some adjustment to hopefully achieve better results. If you have used this cooking method, please “comment” your experience below.