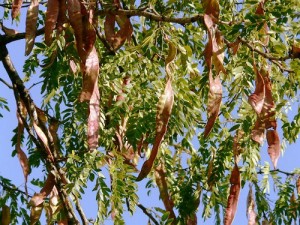 I was surprised the other day to hear from a friend that her grandchildren had collected the seed pods of a locust tree and that the seeds were edible if properly prepared. Wikipedia states: “The fruit of the Honey locust is a flat legume (pod) that matures in early autumn… The pulp on the insides of the pods is edible, unlike the Black locust, which is toxic.” and “…the seeds and the young pods of the black locust can be edible when cooked, since the poisons that are contained in this plant are decomposed by heat”.

Further research revealed an article by Tom Cutts who states that while on a pilgrimage to Israel he learned that John the Baptist’s food “…was date honey crushed from dates, and that the flour for his bread came from grinding the bean of the locust tree.” This took me by surprise as most teachings that I have heard were about the locust insect as a food source. 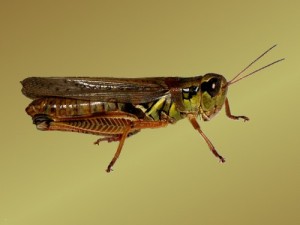 For most of my friends it’s unthinkable to eat an insect and yet 1/3 of the world’s population include insects in their diet. In my last “edibles” class I demonstrated how to prepare a grasshopper to eat. By grasping the body in one hand and the head in the other hand, twist the head to the 3 o’clock position and then the 9 o’clock position, then rock the head left to right as you pull it out slowly. As it detaches, it will pull out the “innards” with it and thus eliminate possible parasites. Then detach the legs and wings and skewer the body onto a stick to roast over a fire. It’s surprisingly good!

In either case, whether a legume or insect, it’s good to become familiar with edible food sources. I stress to my students that food is just the building blocks of your body and it comes in different forms.

One thought on “Locust Vs. Locust”