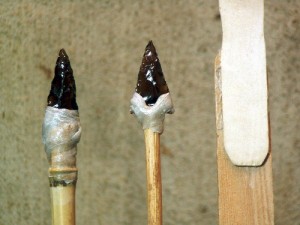 Whether you’re on a camping trip or in a post hurricane situation and need to repair broken material, you can make a gummy-type adhesive using gasoline and stryofoam. “Styrofoam” is technically a trademark for an expanded polystyrene plastic insulation material that we associate with lightweight white disposable coffee cups. I had heard that many international island and coastal regions are using this adhesive mixture to recycle the styrofoam debris that washes up on their beaches. Seeing the application potential for emergencies, I had to try this out for myself.

I took an empty tuna can that was wide and shallow and poured 1/4″ of gasoline into it. Then I took a long stick of styrofoam that I pressed down into it and watched as it melted slowly in the can. There were small bubbles that came out the sides during the process. Eventually a gooey/gummy white lump was produced and this is the adhesive material to work with.

My first application was to haft an arrowhead to a stick of bamboo. I treated the adhesive like plumbers epoxy putty, but unlike the clay-like nature that I expected, it was spongy and wouldn’t adhere well to a slick surface. As I struggled with the slippery gummy texture it began to get slightly tacky and worked a little easier and would adhere to itself. My second effort worked a little better as I discovered that I could pull it out in strands so I wrapped it around another arrowhead that I mounted on a yucca stock.

The next day repairs were spongy and I feared a “fail” in the effort, but after 48 hours of dry-time it became hard and quite solid. With this understanding I mixed a second batch using acetone (a.k.a. fingernail polish remover) as my solvent and it worked much faster. Remembering the slippery nature of the material, I decided to glue some pieces of wood with slightly textured surfaces so I sandwiched the adhesive between them and pressed them together. I placed a weight on it while it dried overnight. The next morning it was solidly glued together! Consistent with other adhesives, it appears that thicker applications take longer to cure.

I can imagine that a camper who takes a styrofoam cooler along with white gas for a Coleman stove would be able to make glue for emergency repairs at their campsite. Should you have the need to make this adhesive, be sure to exercise safety precautions when handling containers of flammable solvents. Use in a well ventilated area and place all containers on a stable surface. Keep away from possible sources of ignition as vapors can easily ignite.