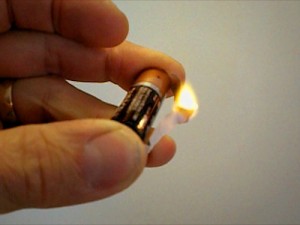 Recently a Survivaltek visitor contacted me regarding a fire method that uses a gum wrapper and one AA battery. I asked for more details so that I could try it out for myself and validate it (and add to my successful firecraft methods list!). I had previously achieved a fire using two AA batteries in series using a thin strand of foil removed from a gum wrapper which when connected to the batteries became a hot filament that ignited cotton tinder. I was skeptical that this method only required a single battery and created a flame from the foil covered paper wrapper.

I followed the information that I was given but without success. The following week I viewed the television program “Dual Survival” where Joe used the same method using a “D” sized battery which initially failed. The hot point in the middle of the foil strip burned out and separated into two pieces. However, Joe created sparks by touching the severed ends and was able to generate a flame. There was some comfort in that achievement but I still wanted to use only a single AA battery and a single piece of foil.

Today there is a wealth of survival skill techniques and information on the Web, especially in the Social Media and after viewing a number of sites I was able to find an excellent video by GreenHHO on YouTube that was strait forward and easy to replicate, enabling me to successfully create a flame with just the wrapper strip and a single AA battery. Thus, I wanted to provide written instructions for my readers.

Items that you will need: foil gum wrapper , fresh AA battery, and a pair of scissors.

1) Take a foil gum wrapper and cut a 1/4″ wide strip lengthwise.
2) Fold the strip mid-length in half on the foil side.
3) At a 45 degree angle cut 2/3s of the width off the fold leaving 1/3 uncut that connects the 2 halves.
4) Pinch about 1/4″ at the middle while separating the 2 halves out to form a straight line.
5) Fold 1/4″ at each end in the opposite direction of the middle fold.

The folded piece of foil should resemble the “bracket” symbol.

6) Place tinder above the mid-point to capture the flame that is created when you place the AA battery between the 2 ends and touch each terminal simultaneously.

This is a marvel of sorts but it has practical applications in emergency situations, so take time to practice this fire method as it could save the day in the future.