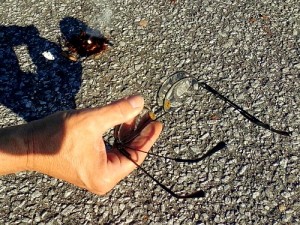 Some time ago I wrote an article about the unique benefits of using two sets of glasses for better magnification when viewing fine print like that found on a map (see “Reading Glasses x 2″). Today it struck me that the same approach could have it’s benefits in solar firecraft. I have explained the method using one pair of glasses in “Pencil Shavings Make Great Tinder“. The challenge with one pair of glasses is that it may be marginal in heat potential and the focal point can be quite a distance from lens-to-tinder. By using two glasses together you get greater heat at half the distance which is much more convenient and easier to control.

I happened to be visiting an industrial facility at the time and it was early evening with the sun lowering on the horizon. I grabbed a small amount of dry shredded bark mulch off of the landscaping and located two pairs of reading glasses. I spotted a friend who I asked to take pictures with my phone’s camera while I began to focus on the tinder. Although the wind was rather brisk, in short order smoke began to appear and with continued focus a large sized ember took shape. I set down the glasses and clutched the tinder and began to blow the ember into a flame. My friends cheered and we were delighted with the results.

Now that we have passed the Spring Solstice, experiments like this are performed much easier. Reading glasses are straight forward magnifiers whereas prescription glasses my not have the same capability due to various optical corrections. In any case, it would be wise to familiarize yourself with this solar fire method because you never know when it might be needed in an emergency.