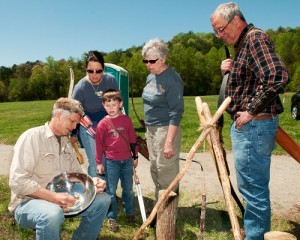 This was my first year as a vendor at the Carolina Traditional Archers Rendezvous. It was their second year of holding the event at the W. Kerr Scott Reservoir. Although the event was held over three days, I was present on Saturday April 20th. I brought my Cheyenne style teepee and market set-up with plenty of material for cooking and firecraft demos.

Throughout the day I met CTA members and some had traveled from as far away as Maine. From my area I could watch activities underway such as trap shooting and static clay pigeon target shooting. There were special events for kids as well. It was a treat to see the variety of bows, arrows and associated equipment made by vendors and members alike.

At each event that I attend where I set up a campfire, I like to start the fire using different techniques. This particular morning I used a “trash” broken car headlight reflector. By placing tinder where the bulb used to be and pointing the reflector at the sun, I was able to get a coal burning in short order. I also demonstrated this method using a metal mixing bowl as a reflector as illustrated in the photo.

In keeping with the genre of the event I demonstrated a more traditional fire method using the bow and spindle. The first demo went fast and easy but a second demo later in the afternoon was hampered by windy conditions. I made several attempts while a group of volunteer firemen watched. Growing tired, I offered one of the fellows a chance to continue the process. On his second try he created a beautiful coal and was successful in achieving his first bow and spindle fire. Now he can make fire AND put it out!

I enjoyed myself at this great event and look forward to participating next year. You can check out the Carolina Traditional Archers website at: http://thecta.org