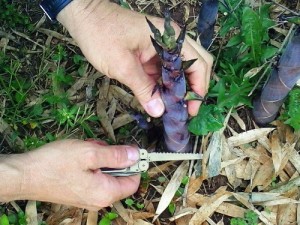 One of the blessings of living in the North West region of North Carolina is that there are flourishing bamboo groves scattered about. Bamboo is actually a grass that can grow to great heights. I once collected a bamboo pole measuring thirty-two feet in length. For Abo enthusiasts a bamboo grove is like a hardware store of resource as it can be used for a variety of projects. It is also a source of food. If you have visited an Oriental restaurant you most likely have eaten bamboo shoots as it is a common element in their cuisine.

While attending a recent event I spotted a grove of bamboo adjacent to the activity area and decided that I would acquire some shoots in order to learn more about their edible nature. In the photo I am shown using a multi-tool to cut them loose. Since then I have learned that by clearing debris from around the base of the shoot you can just bend it over and it breaks off nicely. Some varieties of bamboo in other countries are so large that they require a small mattock to chop them loose. It’s best to select shoots that are short (ten inches or less works best).

When in the field you can eat bamboo raw when freshly picked but the shoots start to become bitter when stored. Bamboo shoots will keep up to two weeks when refrigerated. To prepare bamboo you just strip off it’s outer leaves which leads you to a buttery yellow core. The older shoots may be more green in color. Alternatively you can cut the shoot lengthwise which makes the task of stripping the outer leaves off much easier. Traditionally bamboo is chopped in small slices or julienne cut pieces then soaked over night in rice husks to remove the inherent bitterness. The bamboo shoots can be cooked by either boiling or stir-frying.

Either way that you choose to prepare bamboo shoots they are fun to eat with a wonderful texture.

One thought on “Edible Bamboo Shoots”