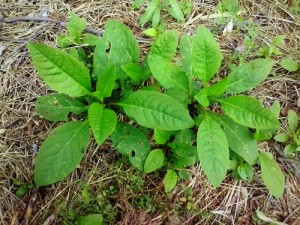 Poke Weed is a fairly common plant that is found around most of the U.S. on the edge of woods, along fence-rows, in pastures and other disrupted soils. It has had various uses throughout history. As a small plant it is edible when boiled in a change or two of water but when mature it is toxic. It also produces shiny dark red berries that have been used medicinally to treat arthritis and the berry juice has been used for dyes and inks.

Years ago I had heard that pokeweed was edible and when I found a bush I sampled the tip of a leaf, not knowing that a mature bush was toxic. Within a minute my mouth started to react to the toxins and I knew something was terribly wrong. I spit out the contents and washed my mouth out thoroughly and fortunately nothing became of it. I learned an important lesson regarding the nature of pokeweed.

Now that it’s Spring new shoots are emerging everywhere and I decided to harvest and prepare pokeweed properly. The plants should be harvested when new and seven inches or less in height. Remove the leaves and avoid purple colored areas. There are a multitude of ways to prepare it with as many opinions of it’s toxicity. In the end I chose a 5/5/15 minute tri-boil cooking method to remove it’s toxicity and raw taste.

Once completed the pokeweed has a mild and “yummy” flavor, much like buttery spinach. It tasted great all by itself (al dente) but I can imagine that taste enhancements like bacon grease, butter, salt & pepper or other condiments would take it to the next level of greatness.

One thought on “Edible Pokeweed”