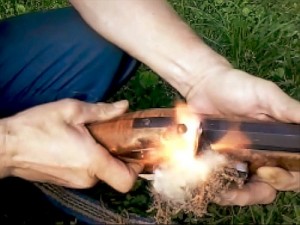 These days flintlock firearms are rarely seen unless it’s in a museum or at a Revolutionary War re-enactment. Historic flintlocks are collector’s items so they are rarely fired but instead modern day replicas are used by re-enactors and black powder enthusiasts. Needless to say, the “fire” in firearms has always been an area of interest in my quest of life-list firecraft accomplishments.

At a recent event an attendee stopped by my display and began to share some interesting information about his life experiences. The topic turned to black powder and he asked me an interesting question: “Do you know why we always see flintlock rifles mounted above the fireplace mantle in old movies?”. I could only guess that there was convenient wall space there. He replied “…because they used their flintlocks to start the fire in their fireplaces.”

He explained that a feather quill was placed in the hole connecting the flash pan to the barrel thus blocking the ignition path from the pan to the loaded barrel. Black powder was then placed in the fire pan and the rifle held next to the tinder and discharged to light it. I knew that this was something that I had to try myself. I was able to contact a friend who owned a flintlock and he agreed to help me achieve my goal.

We established that the rifle was not loaded and gathered the needed materials. The hammer holds the flint that strikes the steel plate (or frizzen) that creates sparks over the pan which holds the black powder and ignites it. I prepared a bird’s nest of tinder using crushed oak tassles or catkins with cattail fluff placed in the center. I held this bundle next to the flash pan so that when I pulled the trigger to release the hammer, the resulting ignition lit the tinder causing multiple embers that I then blew into a flame.

My friend suggested that a piece of charcloth could capture a spark as well so we placed a piece of charcloth in the pan instead of black powder and were successful in capturing a spark. Not only did I accomplish two new fire methods for my life-list but I felt a connection to our historic past and could better imagine what our forefathers did in their daily lives, improvising with the tools and resources that they had available.