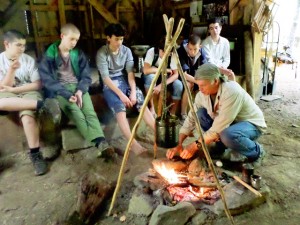 I was invited this year to teach survival skills classes during the Summer Boys Camp at Turtle Island Preserve. I was pleased that recent legislation was passed enabling this activity to continue there as an annual event.

This year I brought a friend who assisted with transporting my gear and contributed to the content of the class by sharing his experiences from his past service in the United States Air Force branch of the Special Forces called Pararescue as well as from his recent time spent on the Appalachian Trail.

The boys this year were particularly attentive and we were able to cover a lot of material over each of the two and a half hour classes. The weather was spotty with frequent rain with only occasional sunshine which unfortunately didn’t lend itself to solar fire methods. However, everyone was able to ignite steel wool with a battery. We also discussed various fire methods within “Ken’s Five Fire Categories“. The other topics that we covered were “Rules Of three”, survival priorities, shelter, signals, edibles, cooking and more. I cooked an egg using hand sanitizer as fuel as illustrated in my video “Bottle Cap Burner“. We concluded each class by making charcloth.

I was quite impressed with the staff and counselors who do such a great job directing, feeding and teaching the boys at this camp that offers such a unique and valuable learning experience.