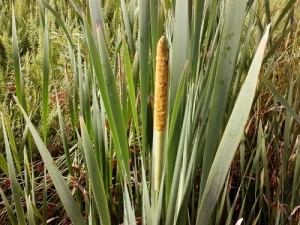 Depending on your geographic region you may still see cattails in their bloom although in my area it is approaching the end of the season. I was driving down the road last weekend and spotted some cattails along a ditch so I decided to stop and take a closer look.

In a previous article “Bloomin’ Cattails” I described how the male portion containing pollen grows on the top of the stalk and the seed bearing portion that we often associate with “hotdogs” grows below it. Pollen is one of the numerous cattail parts that are edible so I decided to take a sample home to photograph after I shook out some pollen in order to show it’s bright yellow color and volume. 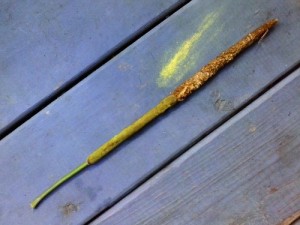 Since that previous article I’ve met folks who have told me that during this time of year you can also eat the seed portion as well, just like you would eat corn-on-the-cob so I had to try it. Sure enough, it was similar to biting off bits of baby-ear corn. It’s a bit chewy and rather bland but that makes it quite palatable to the novice wildcrafter.

I’ve also been told that the seed portion can also be prepared by frying in butter or bacon fat so I guess that will be NEXT on my edibles to-do list. Please leave a comment if you have experience in eating cattail blossoms and share any cooking techniques that you may have used.

3 thoughts on “More About Bloomin’ Cattails”