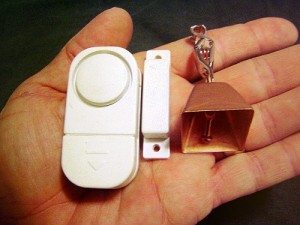 A couple of items that I carry in my Bug-Out-Bag (B.O.B.) are small alarms. When in a sketchy environment I like to be notified of the presence of others whether man or beast. Because I try to keep my B.O.B. as light-weight as possible, these devices are small, and for reliability, they are simple. One alarm is mechanical and the other one is electronic.

The mechanical alarm is a fisherman’s clip-on bell that conventionally is attached to the end of a fishing pole to alert a fisherman that a fish has been caught on his staked-out fishing pole. My application is that I attach it to the B.O.B. so that when I set the B.O.B. down, for instance at a lobby, terminal, or restaurant, I can be notified if it gets moved or lifted.

The electronic alarm is a simple magnetic switch device purchased at a “dollar-store” that conventionally is mounted on a door or window frame with double sided tape. I use it unmounted, usually on the floor by a door so that when it is opened the alarm is shifted away from the magnet which then activates the shrill siren. This arrangement could be modified in the field by attaching some fishing line to the magnet and used as a trip-line. A trip-line can also be used on a mechanical device such as a mouse trap to trigger a loud sound.

I used to carry a motion detection alarm but have since switched to the small (and less expensive) magnetic alarm instead. An alternative to carrying alarms is to stack items like soda cans that will topple over if it is set in a pathway, by a door, or triggered by a trip-line.

For a creative mind there are many solutions for alarm systems but having a few reliable items on hand can make it a much easier task to achieve.

One thought on “Simple Portable Alarms”