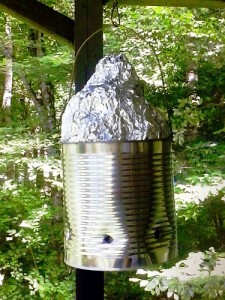 Recently I was approached by a sweet lady who told me about a television program that she had watched where they cooked chicken in a can. I did some research and found quite a bit of information about “coffee can chicken” sometimes called “swingin’ chicken”. I’m sure that other meats could be cooked as well but I decided to follow the procedures that I found. They varied a bit but most recipes called for a three pound chicken. I took a “middle of the road” approach to the various instructions figuring that it would be successful with a little monitoring for any adjustments if needed.

I began by preparing the coffee can (alternatively you can use a number 10 can). This particular coffee can had a wide flange on the top so I trimmed if off so that there was no restriction for inserting the chicken and would allow for air flow around the sides. An inch from the bottom I punched 1/4″ holes using a very large nail. I placed a few blocks of wood inside the can for support for this process. I chose to make 6 holes but more would be okay. Be careful of the jagged edges inside when removing the blocks of wood. To fashion a handle I pierced two holes on opposite sides of the can just beneath the top rim through which I fastened coat hanger wire. I used extra wire to suspend this apparatus from a beam on my porch.

Next I placed 16 briquets into the bottom of the can. When doused with charcoal lighter fluid it should take about 20 minutes to become ready with a white coating of ash on each briquet. I didn’t have charcoal starter fluid so I used some pieces of newspaper and a hair dryer that I used as a bellows to get it started. This process should be performed on a surface that won’t be damaged by the heat, for instance, a grill or rock.

While the coals were getting ready I prepared the chicken by adding a dry rub to it then placed it head-end down on two large sheets of heavy duty aluminum foil. I tightly wrapped each sheet separately, folding the edges so that it was sealed to prevent any juices produced during the cooking process from leaking that could potentially extinguish the coals.

My wife suggested that I put veggies like onions, garlic and celery inside the chicken body which I did, but it may have extended the cooking time a little. Most recipes call for a 3 lb. chicken that cooks for 3 hours, but I could only find a 4 3/4 lb. chicken which extended the cooking time by another 1 1/2 hours which pushed the limits of the coals but was still successful. 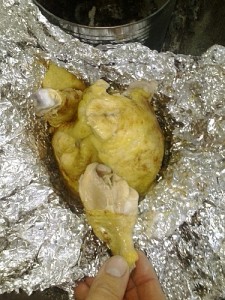 When the coals were ready, I placed the foil wrapped chicken into the can with the feet side up. Because of my chickens’ large size, I decided to ensure air flow along the sides of the chicken by sliding the handle of a butter knife down between the foil and the inside of the can to create air channels. A smaller chicken would not require this extra step.

The beauty of this cooking method is that once the chicken is placed into the can, it can be unattended so that you can go on a hike or go fishing while it cooks by itself. The can gets hot on the bottom and can potentially damage any surface that the can might be placed on so I like to hang the can high enough to avoid critters yet low enough from the supporting structure above it to avoid any damage. While it cooks you can feel the heat at the top of the bundle that lets you know that cooking is under way.

When the meat has finished cooking it will be so tender that you can just pull it apart by hand. The basic rule of cooking time is 1 hour per pound of meat, but with the meat being sealed I wouldn’t worry about over cooking if you return a little later from fishing than expected.

26 thoughts on “Coffee Can Cooking With Chicken”