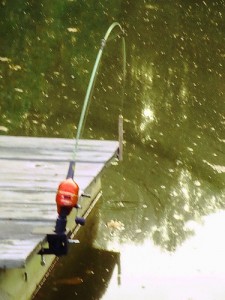 Back in the sixth grade in elementary school I had a teacher who taught things beyond regular academics and shared real life skills. On one occasion he described how to set up an automatic fishing device using a sapling. On land we would call this a twitch-up snare, but when fitted with a hook and bait it becomes an effective fish catching “trap”.

Laws can differ from region to region so I would suggest that you inquire with local authorities before you try this for yourself in Public waters. I have access to a private stocked pond and thus have the liberty to try any and all fishing methods. I respect laws but continue to learn techniques that could save my life in an emergency situation.

A twitch-up trap uses a sapling or pole that is flexible which provides tension or spring action so that when it’s bent over it holds “potential energy” that when released quickly pulls a line that will close a noose or set a hook, depending on it’s application. Near the tip of the pole is usually a short notched stick that holds the bent pole in place until it is triggered.

I began to think of an alternate method to accomplish this and used a regular fishing pole instead of a sapling. I eventually bought a tiki torch clamp that I fastened on the edge of the dock to hold the handle of the fishing pole in place, then I attached a short stick with a trimmed branch forming a notch to catch the bottom edge of the deck planks. The trick is to tie the hook and bait just far enough to touch the surface of the water. The bait should be a small frog, grasshopper or cricket that will tickle the water surface that will aid in attracting fish. The fish will naturally grab the bait aggressively thus springing the trap and setting the hook.

Most fishermen like the thrill of the catch and prefer to reel in by hand but in an emergency situation this apparatus can be left unattended while you are busy building a shelter, fire, or other important work. If circumstances allow you the time to sit and watch it’s rewarding to see the twitch-up fishing rig in action.