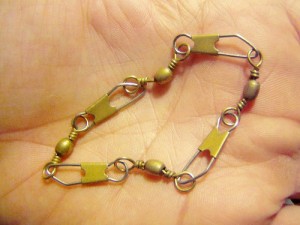 I’ve been working with a young Boy Scout who is currently working on his Entrepreneurship Merit Badge. He is making cobra-stitch survival wrist bands and I offered to display them at my booth at a local fair. As we discussed this his neighbor piped up and said “I make survival bracelets too!”. She held up her wrist to show me and I was taken by surprise. Not to say that what she showed me couldn’t be worn by a man, but it was more delicate as compared to the woven wrist band to which I had become accustomed.

She explained that she had gone fishing recently and during the quiet moments she busied herself by rummaging through the tackle box. She found some brass barrel snap swivels that are used as a convenient attachment between a fishing line and lures. Having several in her hand she began to connect them in daisy-chain fashion into a closed loop. She found that four swivel snaps fit nicely around her wrist.

She offered a number of applications for it’s use in an emergency situation. Here are a few as examples: as a fishing hook, as a retrieval grappling hook, as a safety pin, as a clasp to secure opposing zipper pulls on luggage, or as a zipper pull. Other uses might include using it as a fashion accessory or for attaching small items to your Every Day Carry (EDC) keyring. 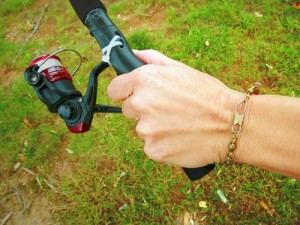 I would love to hear your comments on other ways that you may have used them or perhaps suggestions for their potential use.