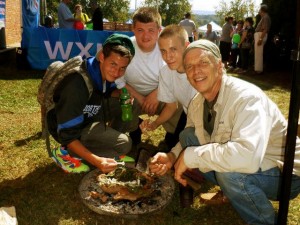 One of the highlights of this year was doing demonstrations and meeting folks at the 2013 Brushy Mountain Apple Festival. Whereas attendance has exceeded an estimated 100,000 in the past, this year was described as a record breaker. I was initially informed that I would not be in the same location this year. I was not happy with that news because the previous 3 years in that location were great. The good news is that I was just moved over one space making room for the WXII Channel 12 booth. WXII12 was the official television sponsor of this 36th annual festival. That move became a bright spot because I’ve had the privilege of being featured in several video segments with different on-air personalities. It was my pleasure to reunite with one of them, Austin Caviness, for a brief visit as well as meeting others on the Newscast Staff.

Aside from brushing elbows with the famous, I was able to meet many new festival visitors and demonstrated various ways to make fire using friction, percussion, and solar methods. For lunch I prepared fish for baking by covering it with mustard green leaves then covering that bundle with clay and placing it on coals. It normally takes about 45 minutes to bake with abundant coals but with the modest amount that I had generated the time had to be extended a bit. The results were great. I handed out chop-sticks to the adventurous folk who eagerly waited to pull off a piece of tender fish.

One of the fun aspects of this event is that I get to erect my Cheyenne style teepee and my 5 foot long fish “pillow” on a tripod. Both of these displays draw lots of interest for “photo ops”. I try to let the photographers get in their family photos too and occasionally become the photographer for them. Of course it is an honor to be a subject of their photos and I would like to thank all of the folks who share them with me as I get so involved that I forget to take me own photos of the event.

The Brushy Mountain Apple Festival is held the first Saturday each October. Perhaps I’ll see you next year?!?