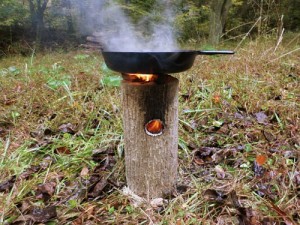 Years ago I wrote about how to make “The Swedish Log Candle” and have since noticed many variations of the same theme appear throughout the internet. While log candles can be used for cooking, rocket stoves in general have been a popular topic as well. There are now a number of various rocket stoves that are made out of a single log, similar in effect to a log candle. After viewing several videos on one log rocket stoves I decided to try it out for myself.

Although I believe pine would be a prefered wood, I used a seasoned poplar log that I had available. I recommend using a corded high-torque drill for this process. I set the 14″ log upright and used a 1 1/2″ blade bit to drill a 6″ deep hole down the center from the top. Then I layed the log on it’s side and drilled a second hole, intersecting the first hole at it’s bottom end. Just a note: at the point of intersection, a blade bit can give a hellacious “kick” so be careful as you approach that point. After blowing out the saw dust I set the log upright to begin preparing it for fire.

As long as I took the liberty of using an electric drill to make a natural material rocket stove, I also took the liberty of using a manufactured tinder by using bamboo skewers. Purists can figure a way to approach this project more naturally but I figured “who cares? This is fun!” I collected a bundle that was about a third of the volume of the hole and poured gasoline on it and the hole walls before inserting them down the shaft. It’s important to “wet” vs. “flood” so as not to have the fluid stream out the bottom hole. Use caution when lighting it with a match or lighter. In this case gasoline was handy but other accelerants would work as well.

Conventional rocket stoves have larger diameter holes and thus fuel can be fed from the bottom hole. When I tried this approach it seemed to choke out the airway and snuff out the existing flame, so I recommend feeding any kindling from the top during the initial process of establishing the stove’s fire.

Once the flame was established I selected three 1″ high stones that I placed around the top surface of the log which became the tripod or trivet for my pot and pan. I initially brought a pot of water to boil for coffee, then continued with a pan with which to fry bacon and eggs. 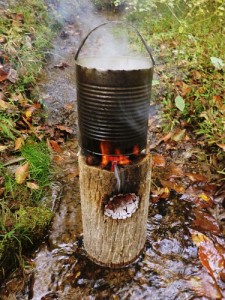 Although this rocket stove takes some “manufacturing” to make, it is a great project for a number of reasons. These can be made ahead of time and stored for power outages, camping trips and garden gatherings. Outside of a little tinder and some accelerant, they are self contained and don’t require the gathering and consumption of local natural materials. They can be controlled and extinguished by using a spray bottle of water and thus can be used multiple times. Because it is elevated, it can also be used in a wet environment. Furthermore, they last for hours and are a joy to use.