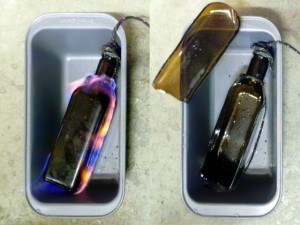 Before And After Break

Breaking glass can be accomplished in different ways and for different purposes. A broken bottle can be used as a knife (see “Break a bottle – make a knife” and “Emergency Skinning Tool“). There has been a technique that I have known about for decades but it has probably existed for centuries if not millennia, that is, using a string to direct a path for fracturing glass.

You may have seen a popular craft idea that makes drinking glasses out of glass bottles. The method uses a string tied around the top edge of the bottle body, soaked in alcohol, then lit with a match or lighter. When the flame burns out either cold water is poured over it or the bottle is dipped in a container of cold water. The contrast in temperature causes a fracture that “pops” when it breaks along the string line. The edge is then sanded or ground smooth. (The top part could be used as a funnel.)

My particular application of this method was employed to break out the flat sides of a square bottle in order to use the glass for flint knapping a knife blade. I initially used some jute twine to tie around the side of the bottle but found that the burn time was not long enough so I retrieved a shoe lace that was thicker, thus enabling a longer burn. That did the trick. I was able to break off the remaining sides in similar fashion.

As illustrated in the photo, I placed the bottle in a bread pan in order to contain all liquids, whether it be spilled alcohol from wetting the string or the water that is poured onto the glass after the string burns out. I used “Heet” gasoline anti-freeze as my fuel (obtained from an auto store/department). It is methyl alcohol that burns clean and comes in a yellow bottle with a long neck. I poked a small hole in the foil seal that allowd me to carefully pour the fluid onto the string that was placed on the bottle.

Final note: the flat pieces of glass from this bottle are quite thin so I am needing to learn a more delicate way to knapp the glass but then that’s part of the fun!

2 thoughts on “Break Glass With String”