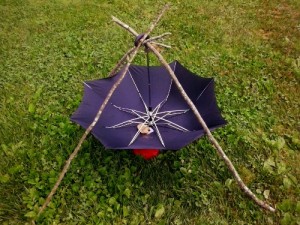 Most folks use an umbrella to ward off the rain, but I wondered if one could be used to collect rain for the purpose of obtaining potable water. The parabolic shape of an open umbrella acts as a bowl when inverted (handle pointing upward) and could be used to collect rain but would have to be monitored in order to empty portions of rainwater into a vessel. The umbrella could be tilted to the side and stabilized for drainage but the angle would reduce it’s collectable surface area.

After pondering various approaches of collection I decided that I could modify the umbrella to make a funnel, thus eliminating the need to monitor the collection process while at the same time maximizing the surface area. The umbrella could be placed over a vessel and left unattended. Because rainy weather is often also windy, a tripod could be used to stabilize the umbrella as illustrated in the photo.

A hole was needed near the tip of the umbrella so I improvised a make-shift grommet by using duct tape. I keep duct tape wrapped around my water bottle so if I needed to, I could improvise this hack while in the field. I placed a piece of duct tape over the inside surface of the fabric to facilitate a clean cut. I then folded the umbrella fabric lengthwise and cut a “V” about 3/4″ wide which created a diamond shaped hole when unfolded. I placed a second piece of duct tape on the outside of the hole and then replaced the inside piece with new tape so that the tape adhesives sealed together through the hole. I folded the tape patch and cut a smaller 1/2″ “V” in the center thus creating a sealed edge lining of the fabric opening. When I placed the umbrella over the collection bin I decided to place a stone next to the hole in order to facilitate better drainage by creating a low point for the collected water to exit.

The open umbrella could also be used to collect dew when left out overnight. Alternatively, a piece of tape can be placed on the outside over the hole so that the umbrella can be used in the conventional manner.

One thought on “Umbrella Water Collector”