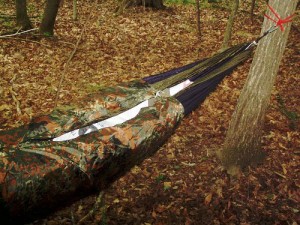 Over the years I have been fascinated with hammocks and the prospect of using them for camping. My path of ownership started with a fish-net style hammock, progressed to a Byers fabric hammock, went deluxe with an Expedition model Hennessey Hammock and lastly an Eagle Nest Outfitters (ENO) two-person hammock.

In recent times I have been focused on perfecting my Bug-Out-Bag (BOB) which is somewhat minimalist in it’s contents. It consists of a small strapped shoulder bag because I also use it when traveling by air and it is small enough to be considered a “personal” item which allows me to take an additional “carry on” item for my clothes, etc.. I carry the ENO in my BOB but as is typical for most hammocks, it has no insulation so it becomes cold on my back-side as I lay in it. On a warm summer day this can be refreshing, but at night you can get hypothermic. For me, an ENO alone would not be a successful overnight option for bivouac. In a regular camping scenario I use an inexpensive fiber-filled sleeping bag that keeps me insulated but there is no room in my small BOB for a sleeping bag so I began to seek alternatives.

My first approach was to use a foam/foil windshield screen which I hoped would provide insulation and heat reflective properties. I lasted until 02:00 o’clock but bailed out because I was too cold. The next time I bought an inexpensive inflatable pool air mattress that enabled me to last until 03:30 o’clock before bailing out due to cold. Next, I had a foil/fabric emergency sleeping bag into which I inserted the inflatable mattress. With this combination I was actually able to sleep pretty much through the night. However the foil/fabric bag has issues with condensation so it gets wet inside. 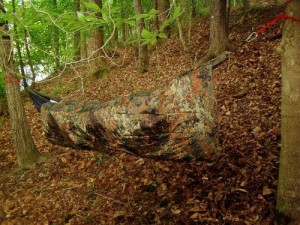 I shared these results with a friend who encouraged me to avoid taking on added equipment but rather, look at my existing equipment for things that might be used for insulation instead. I realized that I pack a Tyvek-type material for use as a ground cloth and a flecktarn pattern poncho. I decided to create a pad by rolling the ground cloth loosely in order to form air pockets. I laid this inside the hammock to cover my seat up to my neck, then I wrapped my poncho around the hammock from underneath and snapped it together over the top. This configuration allowed me to sleep through the night as well without needing the extra gear that I used previously in my tests.

A disadvantage with this arrangement is that it uses the rain gear for insulation so it’s best used in fair weather, but one advantage is that the flecktarn does blend nicely with the surrounding environment.

So, for now, this looks like a workable solution for my minimalist BOB. If I want to do some serious camping, I can be outfitted properly for more severe environments.

2 thoughts on “My Hammock Insulation Tests”