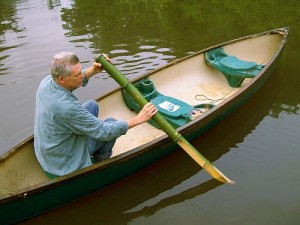 When I go fishing I often use a canoe. On one such occasion I forgot to bring my paddle and was quite dismayed. However, that was only temporary as I began to review my resources.

We are blessed in North Carolina to have small groves of bamboo that I refer to as an “abo hardware store”. Some of the stalks can get rather large. I had collected some stock for various projects and an idea hit me that by splitting a couple of segments at one end I could create a long curved “scoop”. Fortunately I was carrying my multi-tool that has a saw blade so I made a cut just below the second node half way through the shaft, then used a knife blade to split the shaft lengthwise from each side of the cut , out to the end.

I have to admit that bamboo may not be a common resource throughout the U.S. but for the regions that do have it, it works quite well. The bamboo paddle shown in the photo was made to illustrate this article. My original paddle was about 1 1/2 inches in diameter and was a little lighter and slightly easier to handle, but because the new one used fresh material, it should last a longer time.

If you are curious about this method and have no access to bamboo, you could make a replica using PVC or ABS pipe. It won’t split but would have to be cut lengthwise. A pressure test end-cap could be modified to glue in place to create a sealed node at the top of the paddle blade.