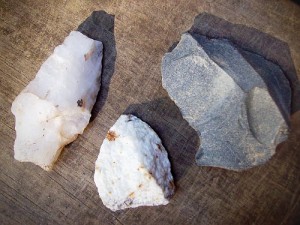 I have to admit that since I’ve moved from California to North Carolina I’ve had much greater success in finding arrow heads and the associated chips produced from knapping. Daniel Boone’s Trail runs right through the region and is rich in historic artifacts and Indian lore.

Obsidian, a glassy rock, is a favored material but only found on the West Coast. A number of other states have flint. Here, in North Carolina, there is no flint. The local material in this region is quartz that is tough to knap and can be found in various shades of white. However a similar material to flint is found on the Southern boarder of the state that is called rhyolite and is usually greenish-gray in color. When this material is found locally you know that it was “imported” and is referred to as “trade stone” because Indians would trade goods to obtain this nicer material to fashion into arrowheads.

Local arrowhead hunters recommend that one of the best places to look for arrowheads is in a freshly plowed field after a heavy rain. The artifacts in the photo were not found in a field but rather in the mulch beds around an apartment complex that I tend. Fortunately for me the general public does not recognize these as artifacts and have been left as “rocks”. Having done some flint knapping I can recognize the signs of man-made shapes created by hammer stones, billets, and pressure flaking.

The two quartz pieces are rough compared to the finished points using trade-stone. Arrowheads can have different shapes based on tribes and differing eras. Some artifacts that are roughly shaped mid process are known as pre-faces. The rhyolite shown here is a piece off of a stone as it was reduced to the final shape. This is known as a spall from the spalling process. It’s not an arrowhead but a byproduct of the process to make one.

My guess is that the grounds where the mulch was processed happened to be located over old Indian campgrounds and were picked up when they loaded their trucks for delivery. It’s a delight to discover these bits of history in the course of tending the landscaped grounds. What can you find in your gardens?

One thought on “Arrowheads In The Mulch”