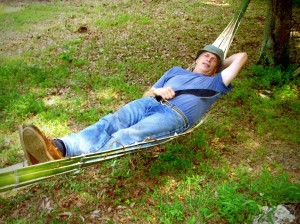 Once in awhile I will see something on TV or other social media that I just have to try out for myself. In this case I saw an episode on a survival program taking place in a jungle where a survival expert made a hammock out of bamboo in order to stay off of the ground at night. As mentioned in some of my previous articles, North Carolina has numerous patches of bamboo and in the Northwest region where I live I have amble access to this resource for various projects.

I began my selection process for a stout stalk of bamboo and stepped on a yellow jacket’s nest. Three stings later, I found a 3 inch diameter stalk (a distance away from the yellow jackets) and made the cut with a pruning saw then used a Kukri Machete to chop off the branches. I loaded it on top of my car to transport home for the work of splitting and testing.

I cut a 15 foot length and then used two 3 foot lengths of jute string to bind just past the first node on each end to limit the ensuing linear splits to come. Next, I cut holes midway in the end nodes through which I would thread loops of cord for suspension purposes. Later, the thinner node split from the hole so I learned that lashing just inside each end node should be made to limit potential splits as well.

I used a stout piece of wood to baton my Kukri blade lengthwise into the bamboo shaft every 1/2 to 3/4 inches, splitting the wood to the lashed node at each end. The initial cuts are difficult but get easier with each new slat that is made. Once that process was complete I collected a 24 foot stout piece of kudzu vine to weave in and out of the slats, one to two passes per node section. This helps maintain even positioning of the slats as well as added support for comfort.

A finishing touch is to knock out the broken node segments inside to eliminate spurs in your backside. It is quite comfortable and a viable hammock in a pinch. Let’s hope that if you need to make one, you will have warm weather and mosquito netting for the night.

One thought on “Improvised Bamboo Hammock”