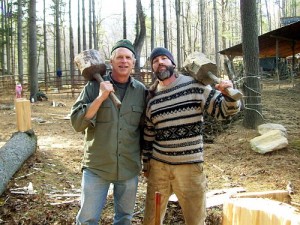 A small group of individuals who have contributed time and effort to Turtle Island Preserve (TIP) were invited to participate in a shingle splitting class. Having contributed instruction and demonstrations at several events, I was one of the participants of this class whose instructors were Eustace Conway and Spencer Bolejack.

It was a beautiful day for such an event even though there were pockets of icy puddles throughout the grounds. It was strategic to stand in the sunlight when possible. Eustuce began the instruction by telling the history of his efforts at TIP which included Spencer’s contribution thirteen years ago. Spencer, once a student, continued building his skill and returned this day as a teacher of the craft.

Although the majority of wood shingles are made from oak, this class focused on white pine which was the main resource at TIP. Whereas oak is split in a radial manner, white oak is cut in parallel fashion. This is all done with hand tools. 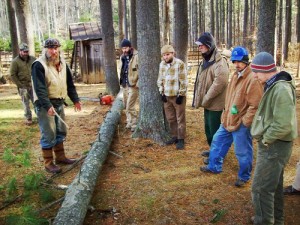 With a chain saw, Eustace felled the first of three white pines of the day. I was totally impressed with his skill as he selected the proper tree, called out the path among a stand of trees for it’s destination and then cut with precision and layed the pine right on target. He proceeded to cut out the segments that were to be split. He then demonstrated the splitting technique on one segment and groups of two to three students began to repeat the process on the rest. Spencer advised us on techniques that would benefit us throughout the day.

Having spent the day learning this skill, I will now be on the look-out to acquire the tools with which to perform this task on my own. As Eustace says, this skill empowers you to be self-sufficient. Now, having the knowledge and some experience, I will be able to teach others to do the same.