Growing up I was taught the standard “Bow” knot for tying my laced shoes. This works fine in most cases as the shoelaces are generally made with a soft fiber and most often with a flat weave. This provides a good surface for a friction hold once it is tied. For active folks, especially children, the loops are often tied a second time using an over-hand knot for extra security.

This is all good until you swap out the standard issue lace with 550 paracord. Some folks perform this exchange as an emergency preparedness measure, giving them wearable multi-use cordage. Five-fifty paracord has a different texture that is a little stiff and slick, causing it to occasionally slip out of a standard knot, even if double tied.

I swapped out the laces on several pairs of my shoes and experienced the slippage problem of the 550 paracord and tried the double knot approach but found that it didn’t work for me, so I experimented with a different method that does work. I began tying the standard knot but wound the “pulled through” loop around a second time. This binds the initial loop with much more friction and “stays put”. It still allows you to pull a single lace to untie it. Check the video above to see how it’s done. 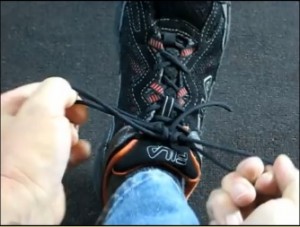 If you have 550 paracord laces, give this a try and see if it will work as well for you.