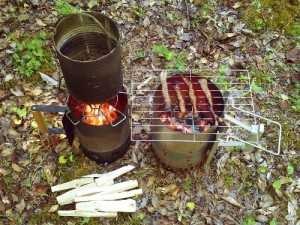 There are many “rocket stove” versions that have been posted on the internet, many of them being home-made. the essence of rocket stoves is the draw-path of the air that supplies the flame, usually drawn from below the fire and rising so that the heat of the flames pulls it up and out the top. Insulated combustion chambers or chimneys enhance the performance of the air making it a more efficient combustion process.

This vertical air-flow path is also used by chimney charcoal starters. They are designed with a lower and upper chamber with a grate in the middle. They use crumpled paper as kindling in the bottom chamber and holds the briquets as fuel in the upper chamber. When the paper is lit in the bottom, the heat travels upward and ignites the briquets stored above. This caused me to think that it could also be used as a rocket stove for cooking.

I found two styles of chimney charcoal starters based on their mid level grates that separate the lower kindling chamber from the upper fuel chamber: one uses a metal plate that has a series of holes; the other has a concentric wire grate.

The model with holes in the plate works well for holding wood sticks as fuel. I fashioned a grate for the top of the chimney using two “beer can” chicken roaster brackets that I fastened “top-to-top” as a support for holding a pot or pan. I used my tin-snips to cut notches in the chimney rim to position it securely in place. This grate served two purposes: it allowed air flow through the top of the chimney as well as provided access for loading wood chips or sticks as fuel to the combustion chamber to sustain the fire while cooking.

The model with the concentric wire grate in the middle works best for igniting charcoal briquets. In essence, it works like a conventional charcoal BBQ. An inexpensive cooling rack can be used as a grate above the chimney to suspend the food items being cooked while allowing the needed airflow through the top.

Why would you use a chimney charcoal starter for cooking? Here are a few reasons: It is portable; inexpensive; easily stored; and the wood chips & sticks version uses easily obtained free fuel. It’s small capacity may not be the best choice for a party, but it can be just the thing for camping or used for a power outage emergency scenario.