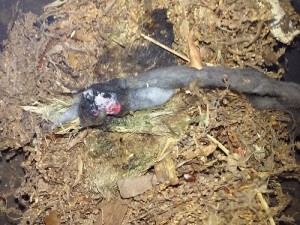 About fifteen years ago I read a post in a primitive skills forum where a Slovokian fellow was sharing his newly discovered method of making fire using a cotton sanitary napkin, charcoal, and two boards. After reading his description I tried the method with the materials that I had on hand without success. I set that aside as I pursued other methods on my “to do” firecraft list.

To my delight I recently saw this method demonstrated on The Weather Channel’s “Fat Guys In The Woods” program hosted by Creek Stewart. The participants each created their own fire using this method so I was encouraged to pursue this again, taking cues from their example.

I went to a store to buy a cotton sanitary napkin and began to read the labels regarding the material used. I saw that they listed cotton and Rayon and I didn’t know how successful that would work so I opted to buy 100 percent cotton balls instead for about two dollars. When I returned home I unraveled the balls and formed a six by four inch square. I used some charcoal left over from my campfire to crush into carbon dust that I sprinkled on top of the cotton pad. Starting from the narrow edge I rolled this tightly like a cigar then compressed it further by rolling it between my two hands.

I placed this carbon impregnated cotton roll between two “two-by-four” boards with one board used as a base while the other board was passed lengthwise back-and-forth on top while employing increased speed and pressure. Eventually smoke started to appear out the ends of the cotton roll and when I removed the boards I could feel a hot spot near the end. When it’s “too hot to handle” you know it’s ready to be opened up at that spot to expose it to the air so that it can be coaxed into an ember.

This a great alternative fire-by-friction method that uses simple materials. For me it was a satisfying accomplishment that I can now check off of my firecraft bucket list.