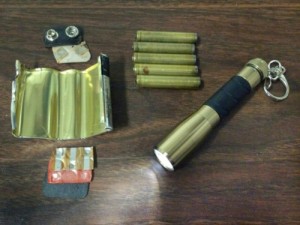 I enjoy accidental discoveries and this week I discovered something delightful. I had an electronic device that uses a 9V battery and it was acting up, indicating a need for a replacement battery. As I removed the old battery, one of the terminals came off which made it inoperable even for testing. I became curious about it’s construction and decided to have a “look-see” inside so I grabbed my Leatherman multitool and began to peel back the outer metal casing. To my surprise six small battery cells were tucked inside. They looked like anorexic AAA sized batteries that were slightly shorter and skinnier, with no insulating labels around them. Being familiar with more conventional battery sizes of D, C, AA, and AAA, I had to guess that these would be classified as AAAA, so I did a little research.

It turns out that there ARE AAAA sized batteries (pronounced as “quad A”) with equivalent cells known as “LR61″s. They are 3.5MM shorter than AAAs and can have reverse polarity compared to conventional larger sized batteries. I took a voltage meter and discovered that was the case with these. So I began to think about applications for this new find and decided to test them as a replacement for a single AAA cell flashlight.

In order to make this new sized battery work I had to modify it a little. To lengthen it I added a small wad of aluminum foil to the flat end while wrapping the entire length of the cell with masking tape, making sure to surround the terminal at the other end for proper insulation. I wrapped enough tape around the circumference to match the diameter of a AAA battery so that it would not rattle and be centered properly for the flashlight connectors. As you can see by the photo, the battery works! The remaining five batteries lie beside the flashlight, along with the 9V casing and it’s parts.

This was a fun discovery and experiment but I also wondered about the significance of other applications. When you only have access to a 9V battery but have need for 1.5V cells, the dis-assembly and modification of the AAAA cells within can provide a variety of voltages when they are placed in series or strengthened when wired in parallel. If you find yourself in an emergency situation this could be valuable knowledge.