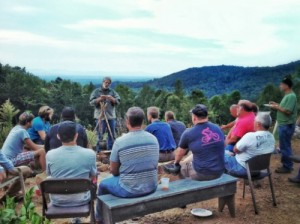 I was invited by the Men’s Group of Unified City Church of North Wilkesboro, North Carolina to demonstrate survival skills with an emphasis on firecraft. Nearly two dozen guys showed up for the event spanning three generations with a wide variety of life experiences. After having a collaborative meal of awesome nachos we began to gather around a campfire ring to begin our time of instruction and demonstration.

I began our session by handing out wallet-sized pieces of paper on which were printed seven points of survival priorities. We moved on to some edibles. I brought a prickly pear (or nopales) cactus paddle as seen on many survival shows and prepared pieces for sampling. Earlier upon my arrival I caught a grasshopper and then demonstrated how to prepare it for roasting. A young lad volunteered to eat it later with a nod of approval.

We progressed on to firecraft where I built a campfire from scratch so that everyone could see the progression of materials from thin to thick and lit it with the sparks from a broken flint-wheel lighter. Then I shared my “Five Fire Categories” of optical, electrical, chemical, percussion, and friction, and proceeded to demonstrate each one.

Optical – The sun had already set so I could not demonstrate optical fire methods but I did show the different optical devices and described how they are used. I gave each one a wallet magnifier of their own to experiment with on a sunny day. I always keep one in my wallet as a solar fire starter.

Electrical – I pulled off a piece of AAAA steel wool into a strand and crossed the terminals of a lantern battery. Nine volt batteries work well for this. I placed an ignited piece into a paper towel and coaxed it into a flame. Later in the evening I located a AA battery and created a flame using a strip from a foil gum wrapper.

Chemical – I poured out a small mound of Potassium Permanganate (KCO3) and made a small impression in the middle whereupon I added a little bit of anti-freeze (containing glycol). After a few moments smoke appeared followed by an erupting flame. This demonstrated how exothermic reactions of chemicals can create a flame.

Percussion – I showed the materials used for Flint & Steel fire making. I showed different strikers and various rocks. I demonstrated how to make “quick charcloth” by burning a piece of 100 percent cotton cloth until black and extinguished it between two blocks of wood. I then placed it on the flint to catch a spark from the steel striker. Later in the evening I demonstrated a fire piston using the quick charcloth as tinder.

Friction – My last demonstration was Bow & Spindle fire method. This took a few tries but demonstrated the nature of different woods and what to look for in developing proper char powder for the creation of a live coal.

By the end of the meeting the men had gained a greater knowledge of survival and firecraft skills that they can now pass down to their children and future generations.