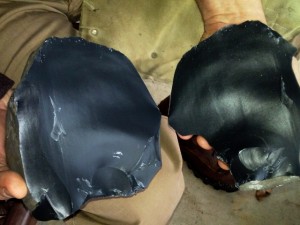 Dacite Spalled In Half

One of my outdoor buddies presented me with a football sized black rock and said “here is a piece of obsidian that was given to me and I wanted you to have it for flint knapping”. I was very excited but nervous at the same time. I knew that reducing a rock down into usable pieces (called spalling) could be very risky if not approached correctly. I decided to contact a local expert and see if he would spall it for me as I watched so that i could learn the technique.

When we met I handed him the rock and after a brief examination he said “I’m not sure this is obsidian, but let’s open it up and see what we’ve got here”. He selected a baseball sized hammerstone and placed a leather apron over his thigh, then layed the rock on the side of his thigh and with an arched swing, struck the rock’s edge with a downward blow. After a few strikes, the stone split open the full length of the rock. He said “oh… this is dacite… similar to obsidian but different. Dacite is a volcanic rock that has cooled under salt water and it works differently than obsidian”.

Not too surprising, different materials require different tools to achieve the best results. A gritty-surfaced hammerstone worked best in this case but a hardened dogwood billet works best for harder stones like quartz and rhyolite. The effectiveness of the tool has to do with it’s surface contact time during the strike. 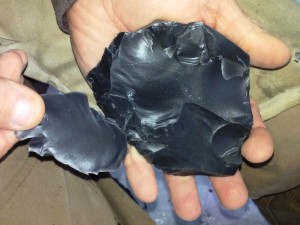 In each case you look for a “shelf” or outwardly slanted edge that can receive the strike of the hammerstone or billet to transfer the energy into a cleaving result. He showed me some anomalies within the rock that would interfere with a clean break and then proceeded to show how to eliminate them or diminish their effect. He proceeded to spall off usable flakes that could be used as cutting tools along with larger pieces that could be made into arrowheads.

After having observed the reduction of the first half of the rock I now have the remaining half of the rock to work with to apply what I have learned from his demonstration. I expect that exciting times as well as frustrating times lie ahead but I’m sure that they will be rewarding in my quest to master flintknapping skills.