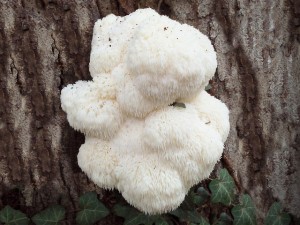 As stated in a previous article, I have entered into a season of discovery and education regarding edible mushrooms and in the region where I live the weather conditions have produced a bounty of various fungi. This past week my friend and mentor showed me two distinct mushrooms that add to my edibles list.

I always appreciate when mushrooms are distinctive and thus easy to identify. The Lion’s mane has a hair-like texture and pure white when new. This one was found a couple of feet off of the ground on a maple tree and usually grows where there has been some sort of injury to the tree. When cooked it’s texture is reminiscent of a scallop with a slight tartness at first bite. It is also known as Bear’s Head, Bear’s tooth, Bearded Tooth Mushroom, Satyr’s Beard, Bearded Hedgehog Mushroom, pom pom mushroom and others depending on it’s regional nickname. 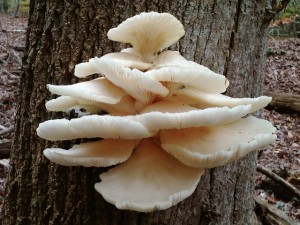 Oyster mushrooms can be found on a variety of dead trees, stumps, and rubble. They are white with deep gills having a stem on the edge that attaches to the tree source. It can be slightly tan or buff in color in the Winter months. It has a distinctive fishy smell and when cooked are mild in taste. When I cook them I think of talapia fish because both the oyster and the talapia take on the character of the condiments with which they are prepared.

I’m learning that mushrooms, like flowers and fruit, appear in different seasons of the year. As my focus has turned to mushrooms I have begun to not only recognize their environments but observe their presence. Although it seems to be the tail end of the honey mushroom season I hope to see their possible re-emergence under the right conditions along with other new discoveries as we approach Winter.

I always advocate that if you pursue this field of interest, be sure to contact an expert so that you can verify any of your finds as there are poisonous varieties that you do not want to mistake as edible.