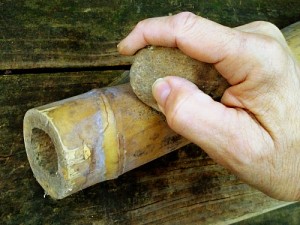 Because we live in an electronic age, we have become accustomed to communicating with others using devices such as phones, intercoms, computers, or other devices, but in emergency situations these things may be inoperable or unavailable. Imagine if you were trapped in a structure after an earthquake or perhaps imprisoned as a hostage, how could you communicate if your voice could not be heard?

In various conflicts throughout history, most notably Vietnam, a code was developed using “taps” that were used by prisoners of war that could be used by tapping on anything such as a pipe, bar, wall… whatever produced a sound by percussion. This became known as “Tap Code’ or “Knock Code”. It is built on a table of letters called a Polybius square, some of which have slightly different arrangements of the 26 letters that are placed into 25 cells. It was memorized much like we would memorize a multiplication table so that when a combination of taps were heard it would be recognized as a letter. 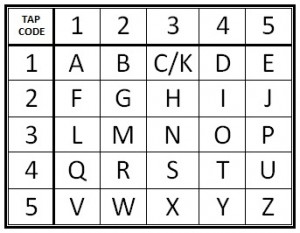 As you can see by the table it consists of five rows and five columns. Letters are placed in each cell, left to right, top to bottom, with the letters “C” and “K” being interchangeable. The letter “X” was used to break up sentences. Each letter consists of two parts of tapping: first the row number, then the column number. For instance, the letter “S” would be represented by four taps (row) with a slight pause, then three taps (column) followed by a longer pause before introducing the next letter. Using periods to illustrate, it would look like this: …. … I imagine that at first a person would visualize the table while hearing the taps but eventually each combination of taps has a “sound” that becomes recognizable as the letter that it represents.

Unlike Morse Code, Tap Code does not need sustained or differing tones to define a letter. It does not require electronics or light sources. It is completely non verbal and the table is simple enough to create for practice and memorization. I would like to mention that Morse Code has provided a universal “SOS” signal that could be used by tapping like this: … . . . … to gain attention by rescuers.

You can develop this skill of sending and receiving Tap Code by practicing with a friend and eventually teach others as well so that they too can be better prepared for a possible emergency situation where an obscure location or covert communication is needed.