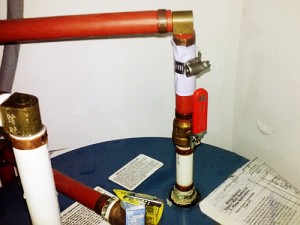 I was taking a stroll by a river this morning when I received an urgent call from my son. “Dad! a water pipe broke in my apartment and the floor is flooded and I don’t know how to turn it off… I could use your help!”. I explained that there may be a main water turn-off valve in the utility closet or look outside for the city meter/shut-off valve and that I was on my way. I stopped by my house on the way and picked up my automotive tool box.

When I arrived I took a quick look around the outside for the city water meter box but didn’t see it so I knocked on the door and my son let me in. The inlet line to the water heater had split before the turn-off valve so fortunately it was cold water that was spraying under pressure. Because it was spraying near the power cable and was leaking through the downstairs ceiling filling the light fixtures, my son had turned off the power at the electrical panel. I used my phone initially as a light source to evaluate the situation. I could not find a main shut-off valve in the apartment either so we decided to call 911 for assistance. After leaving circumstances, location, and contact info I returned to the task of controlling the leak.

I had a hose clamp in my tool box, but I also needed a seal to cover the split. I usually carry a plastic Fresnel lens in my wallet (for solar firecraft) and it comes in a vinyl sleeve. I wrapped the sleeve around the pipe below the split then placed the hose clamp over it. I used my son’s multi-tool screwdriver blade to tighten it down almost all the way, then slid the two over the split and finished tightening it to seal the leak. That ended the immediate crisis. 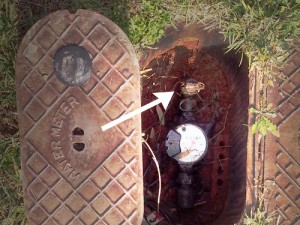 Valve Turns Off When Bar Is 90°

In an apartment scenario the meters to utilities tend to be found in groups so I circled the building on the lookout. Previously I had pounded on other tenants doors for help but had no responses. His apartment was on the end next to a small hillside and it dawned on me that for the convenience of utility meter readers that it might be right next to the uphill side-street on top of the grassy knoll… presto! There it was. They were unmarked so turned off both end valves to be sure his was covered.

About a half hour later the city water employee showed up and we determined which valve belonged to my son’s apartment. After my son and I determined which areas inside the apartment were not affected by the leaking water we turned on the unaffected circuits so that we could see to clean up and run fans for drying.

The events of this morning caused me to think about preparation for dealing with utility emergencies as they relate to the home environment. There are generally three areas to prepare for: water, electricity, and in some cases natural gas or propane. By code each utility should have shut-offs or disconnects so it is important to know where they are located and how to operate them. We found that the breaker box wasn’t labeled exactly correct, so it will be tested later and labeled more thoroughly. It would be wise to acquire appropriate tools dedicated to these potential needs and stored in a bin that is easily reached and not next to a point of potential hazard. Possible tools might include a crescent wrench, vise grips, channel lock pliers, screw drivers (both flat-blade and Philips), hose clamps, duct tape, electrical tape, and any specialty tools for utility turn-off. I can’t help but wonder if this article might be speaking to someone who will need to be prepared for the near future, so check out your situation now!