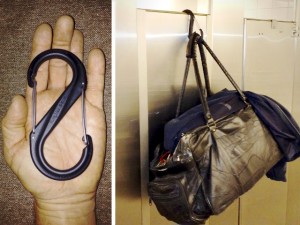 One of my musings in spare moments is deciding what the contents should be in my Bug-Out-Bag (BOB). On a recent plane trip I needed to bring my laptop computer and decided to modify my BOB to accommodate it. I had to eliminate some favored items but it was a good exercise to pare down to essentials.

I decided to create a “travel” BOB vs. an all-purpose BOB. Knowing that I would be traveling through various airports I had envisioned the need to keep my BOB or carry-on luggage off of the lavatory floor (for obvious reasons). I had purchased an “S” carabiner (S-biner) that would be large enough to use as a hook from which to hang my BOB on the stall wall. Generally there are hooks installed inside the stalls but not always. Sometimes they have been broken off.

When I entered the restroom all of the stalls were occupied, so I chose an alternate fixture for use. Without shelves for luggage I was delighted to have my S-biner with which to hang up my carry-on bag on the outside of the stall wall while my BOB had a sling so I kept over my shoulder. Problem solved to my relief.

This of course is only one application for an S-biner. I will also use it to attach both pieces of luggage while sitting in the terminal so it would complicate a potential theft attempt. Beyond that it could also be used to attach other items such as umbrellas, cups, bottles, coats, etc. I found that the S-biner should have a one inch gap in order to be large enough to fit over the stall wall or perhaps hang on a table or counter edge.