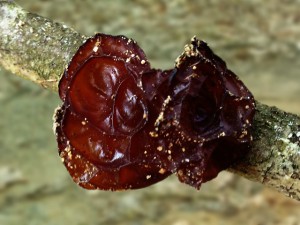 I have continued to expand my knowledge and first-hand experience in identifying and eating edible mushrooms. What has enabled me to do this is having a mentor who has shared his finds and verified my finds of various fungi in our location. One mushroom that he had recognized but had not pursued due to lack of quantity was in the “jelly fungi” family often known as “wood ear”, “Judas’ ear”, or “Jew’s Ear”. They are typically found on dead attached or fallen wood. He had not sampled any for himself and seemed hesitant to endorse it due to lack of his own personal experience. That in turn made me hesitant to cook some for myself.

I live in a rural region of North Carolina which lacks the population density that usually hosts a wide variety of ethnic markets that support the diversity of it’s residents. While recently visiting my roots in the Bay Area of California I wanted to shop for what I considered more exotic food offerings. 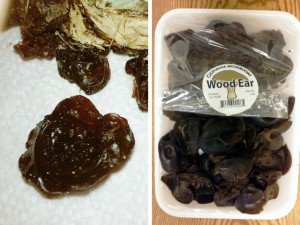 I decided to visit an Asian market and while roaming the produce department happened to discover a packet of “wood ear” mushrooms. I was delighted as it matched the same fungus that I had found in North Carolina and verified it’s edibility. In China and Southeast Asia they are cultivated on a commercial scale and are widely exported in a dried or powdered state as “black fungus”, “cloud ears”, or “wood ears”. The package of wood ears shown in the photo was cultivated in California.

I hailed one of the patrons to ask if they had eaten this and how to prepare it. They had used it in egg rolls and soups. I decided to fry them as I had done for all of my previous finds. Because of their high moisture content they actually began to snap, crackle, and pop much like bacon when it’s fried! It was rather startling! I added them to scrambled eggs for my breakfast. The next morning I decided to add new slices to an egg-drop soup along with chopped green onions. It was delicious.

Having had this experience I am looking forward to eating the local wood ears that I find and this has expanded my range of fungi diet and expanded my culinary pallet with great delight.