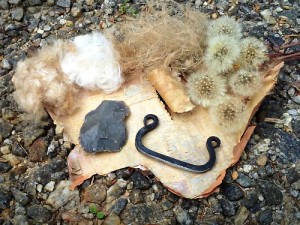 Until recently I only knew of two types of metal strikers used to create fire by percussion: carbon steel, and ferrocerium rods. I now know of a third kind of metal – titanium. Steel strikers have been in existence for millennia, and ferrocerium (a metal alloy) was invented in 1903. Ferrocerium has been used as “flints” in lighters for decades and is often attached as a rod to a magnesium block that is often seen on today’s survival reality television shows.

Strikers create a spark when struck on the edge of a sharp stone due to the micro bit of shredded metal that is sheared off. The friction makes it “red hot”. Each of the metals when sheared have differing temperatures and duration of their sparks. Steel is 2500°F, titanium is 3263°F, and ferrocerium is 5430°F (hence, it’s popularity as a fire starting device).

High carbon steel strikers are the classic instrument of “flint & Steel” fire making. The method requires charcloth (carbonized cloth or other material) as a form of tinder to be used to catch it’s spark. There are a few natural materials such as chaga fungus and horse hoof fungus that will catch a spark as well. Sparks on other materials such as cattail fluff or other natural tinder have been reported to catch a spark but I have not been able to ignite them using the conventional steel strikers.

Recently I watched a video demonstrating the use of a titanium striker. Because the spark temperature of titanium is higher than that of steel it is able to ignite natural fibers known as “flash tinder” without the use of charcloth. I decided to purchase a titanium striker to experience this for myself and now it’s a new ball game! I was able to strike sparks directly into cattail fluff and created flames.

The titanium striker maintains the look and feel of the classic carbon steel striker but produces a hotter spark with a longer duration for a wider range of tinders with which to create fire. I have begun to experiment with different flash tinder and was able to create fire from cattail fluff, cotton fiber, jute fiber, and dandelion seed puffs. In the end I will have developed skill in using all three types of strikers and will be able to apply the best tool for each situation.