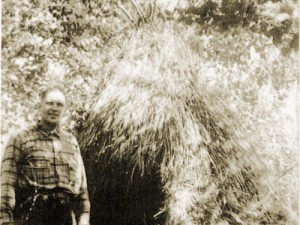 Even though I grew up in the city I always had an interest in bushcraft and wilderness ways. I spent much of my childhood in my backyard hanging out in trees and pretended to live in the woods. After reading a book on Indian and outdoor lore I set out to recreate some of the crafts… making cordage from vines, a spear using slate flakes, twitch-up snares, and practicing archery among other things.

Part of what fed my outdoor and wilderness interest was my Grandfather (my Mom’s Dad) who grew up on a farm in Minnesota. He would recount his hunting stories and showed me a photo of a hut that he and his brothers made on an island in a nearby lake. Later in life as an explorer he became a “rock-hound” and hunted for agates, Jade, and found many arrowheads in the process. 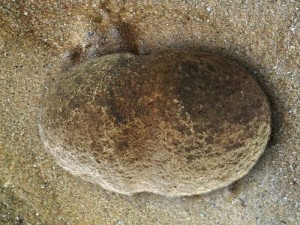 My Dad grew up on a farm in South Dakota where his skills centered around repairs and innovations to keep things running. He also stumbled upon an Indian artifact in the field which he later donated to his home town museum (Historical Society of Lake Norden). Later in life also took our family camping in various state and national parks where we could put our feet in the soil and wade in the water.

These family stories and activities contributed to my pursuit of primitive and survival skills despite my urban up-bringing. It was during the Y2K scare that my wife and I homeshooled our sons. The internet was burgeoning with “survival” information and while researching for projects for “science night” I ran across an article about fire by friction using the bow & spindle method. That “sparked” my interest in firecraft that continues to this day. I broadened the scope of my research and began to practice what I read. I was able to share these skills and knowledge with the Boy Scout troop that my sons and I joined.

I have endeavored to teach my sons these skills so that they can pass them on to their children. I’m grateful for my “roots” and hope to be an inspiration to my “branches”. I heartily agree with the Scout motto to “Be Prepared”.