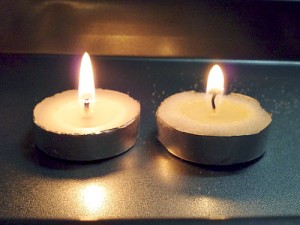 What? Salted candles last longer? Who ever heard of that? And what do you mean? Well… my wife and I have taken to watching “who done it” movies, typically those whose genre is solving murders. Most have been British productions that exclude the gory details that are found in many American series. Anyway, most pieces of the puzzle are sprinkled throughout the program that seem incidental but play an important part to solving the crime.

On one such occasion there was a mystery death at a home spa where many candles had been lit all around and were still burning but nearly out. There were traces of salt around which seemed out of place and mysterious at the time. The “six hour” candles established a timeline that gave everyone an alibi but the Chief Detective put “two and two together” and realized that the salt had been added to the candles to make them burn longer, thus altering the timeline of the suspects testimonies.

So, what does this have to do with survival skills? I was intrigued by the concept that the duration of burning candles could be altered and extended. In a power outage scenario such as one our community experienced recently, a candle could provide light longer or be used as an ignition source for other purposes, similar to keeping a live coal on hand.

I decided to try this out for myself. I took two tea candles and poured some salt on one, covering the top surface. I quickly discovered that the salted candle wouldn’t lite. The wick burned down and extinguished. It occurred to me that there needed to be enough wax exposed to allow the lit wick to melt enough wax to sustain the flame so I cleared the area around the wick and relit it. Although the candle remained lit it was obvious that the flames of the two candles were different. The salted candle’s flame was suppressed and smaller, thus consuming the wax fuel at a slower rate.

The effective light comes from the unaltered candle but depending upon your circumstances longevity might be a priority so it’s nice to know about this little technique that gives you an option when needed.