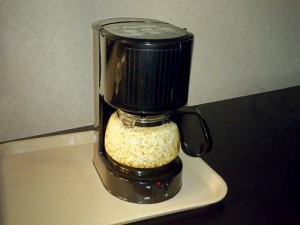 I traveled out-of-town this week to attend a seminar that was held at a hotel where I stayed for a couple of nights. Meals were provided but that usually doesn’t cover my hunger at night so I often bring some provisions with me and this time I decided to try one of those “hacks” that occasionally appear on various social media to prepare my after-hours meal.

I brought a packet of ramen noodles that would traditionally be prepared in a pan filled with boiling water. There was a microwave oven in the room so I could have used a coffee cup to heat water into which the ramen noodles could have been added but in this case I chose to use the coffee maker to cook the ramen noodles instead.

It was a four cup model that worked out quite well. I filled the coffee pot with about three and a half cups of water and poured it into the water reservoir. Before I opened the ramen noodle package I crushed it’s contents inside so that all of the broken bits would be contained. Then I opened it and emptied it along with the flavor pack contents into the coffee pot. I replaced the lid and put the coffee pot into the machine and turned it on. The heated water empties into the pot from above while the warmer plate keeps the contents hot from beneath. After the water finished processing I let the pot remain in place for about ten minutes which allowed the noodles to hydrate and plump up.

After the short wait I removed the pot and it’s lid and began to eat right out of the pot with a spork (a favored culinary utensil). I was delighted with the result. I imagine that other dehydrated food could be cooked this way as well. After consuming the meal I washed the pot out with soap and water as it is a vessel to “pour from”, not “eat out of” so the next user would have no concerns over sanitation. I would love to hear comments of your improvized cooking on the road.