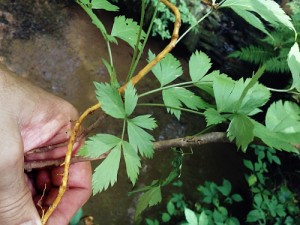 This week I was introduced to yellow root, a medicinal plant that grows along creeks and waterways. It has traditionally been used to treat numerous ailments such as mouth sores, urinary problems, digestive issues, and more. It contains berberine which is also found in goldenseal.

Yellow root requires moist rich soil and emerges in the Spring, growing to about fourteen inches in height. It has jagged parsley-like leaves with a brillant yellow root that is exposed when scraped with your fingernail. As it matures it will produce small purple flowers and a single green raspberry fruit that turns red in July.

The root is used in different ways… some folks just chew it but it can also be used to make a tea, tincture, salve, and more. Most folks consider it to be bitter but the medicinal benefits outweigh the taste. It is most effective in the first week but should not be used past three weeks. Yellow root should not be taken by infants or women who are pregnant or breast-feeding.

The yellow root shown in the photo was given to me by a friend who collected it by a creek. I have replanted it by a creek close by as part of a collection of medicinal plants that can become a naturalpathic pharmacy for my use in the future.