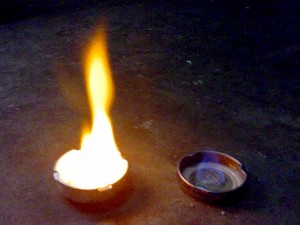 A few years ago I wrote an artice about using hand sanitizer as fuel to cook with. You can watch my VIDEO demonstrating this. Hand sanitizer is sixty-two percent alcohol and thus is flammable and can sustain a flame when lit. One advantage of using this flammable gel is that it is less hazardous than liquid alcohol in that if spilled it won’t spread as quickly or as far thus easier to contain for extinguishing in an emergency. A disadvantage when compared to liquid alcohol is that it’s flame is not as robust for use.

In the past I have tested different brands of sanitizer to learn about their properties and effectiveness in their ability to ignite and sustain a flame. Recently I tested a dab of sanitizer that didn’t want to stay lit. When it extinguished I would spread it out with my finger and re-light only to see it extinguish shortly thereafter. This may have to do with it’s composition or shelf-life.

Awhile back I read an article about mis-use of hand sanitizer by some youth who added salt to it in order to extract the alcohol which they ingested and ended up in the hospital. That technique came to mind and I wondered if salt would release enough alcohol from my sample in order to sustain a flame. I happened to have some salt nearby and sprinkled some on the remains and voilà, it started to melt and when lit stayed lit longer with a larger flame.

I decided to do a side-by-side comparison so I took two small jar lids to safely contain the fuel and put a penny sized dollop of sanitizer in each. I added salt to one and then lit them both. You can see the contrast of the two in the photo. Needless to say that the bigger flame burned out sooner and lasted only a fraction of the time that the unsalted sanitizer did.

After further tests and thoughts I have come up with some “pros” and “cons” of the two burning methods.

Cons – 1) Because the flame is so vigorous it burns out much sooner then the untreated sanitizer.

Pros – 1) The flame is low but steady and lasts much longer – good for cooking/heating. 2) The blue flame is almost invisible so that it has low profile visibility if needed.

Cons – Because the flame is nearly invisible, especially in daylight, it can be dangerous if you don’t realize that it is lit.

In the end, each sanitizer method has it’s pros and cons but by experimenting with each method you will broaden your understanding and experience on how to maximize it’s effectiveness for your improvised fuel application.