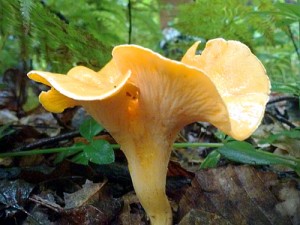 Last Fall I began my journey of learning about mushrooms. It was a bountiful season and once it ended I looked forward to the Spring to new finds… Morels, only… they didn’t appear in my region. A friend of mine is my mushroom/fungi mentor and HE didn’t find any either. However, this week I got a call from him that chanterelles had arrived and I was delighted when he took me on a walk to show them to me.

Chanterelles can be found close to streams and other low lying damp areas. They appeared after a several bouts of drenching rain that had followed several days of stifling heat, a.k.a. rainy muggy weather. In the Southern Appalachians, chanterelles can usually be found all summer through early fall. July and August are the most fruitful months as evidenced by our find.

Chanterelles are easy to spot in the summer forest, as they usually range in color from yellow to deep orange and grow solitary or in pairs. The cap is wavy and generally funnel shaped. The false gills start at the outer edge and appear as wrinkles that are forked and wavy and run down the stem. They are the same color as the rest of the chanterelle. Chanterelles can also have a fruity apricot-like aroma. 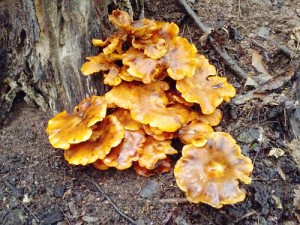 Thankfully chanterelles are distinctive so don’t confuse them with jack-o’-lanterns that have a more conventional cap and stem with free, parallel gills and grow in clumps. They are toxic.

Chanterelles are meaty and chewy. Although some people can eat them raw, most folks prefer them to be cooked, and one of the best ways to cook them is to slice and sauté them in butter. I’m still learning how to cook mushrooms to their best advantage but longer with lower heat seems to work best for me.