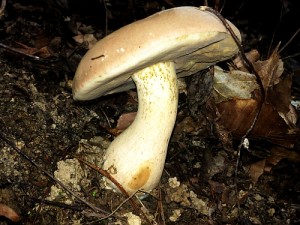 Over the past few weeks bolete mushrooms have been popping up all over in our region and has become a whole new learning experience for me. I have learned that there are many varieties and vary in edibility. A few are toxic, some inedible, and some are prized for their delightful taste. I would like to say up front that before you pursue collecting mushrooms, be sure to contact a local mushroom expert who can positively identify them for your own safety. I am grateful to have knowledgeable forayer friends with whom I share my finds.

Although I am new to this species of mushroom I wanted to share some tips that I’ve learned regarding their identification.

Boletes have fleshy caps with a puffy underside composed of sponge-like pores. They may also have a bulbous stem with a slight surface texture that has been described as netting or reticulation. They come in various colors but the edible boletes tend to be buff or tan in color.

It’s not unusual to find pits in the caps that have resulted from slugs and bugs taking some bites as they are a favored food for them. These spots can easily be trimmed away when preparing to cook. Another feature to be aware of is when you cut the stem, notice if there are holes in it. This would indicate that insects or maggots have entered the mushroom through the stem and may result in damage within the cap. 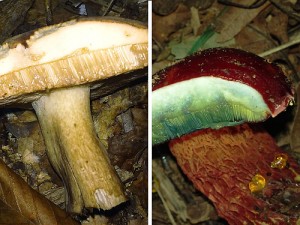 The first test toward edibility is a visual step. If you cut the cap or scrape the pores, look for a reaction. If you see a sudden discoloration such as a dark blue-to-green color, it indicates that they are bitter and may cause stomach upset. If the cut or bruised parts do not change color after a minute or so you can move on to the taste test.

Pinch a small piece off of the cap and place it on your tongue to taste. Roll the piece around on your tongue without swallowing for half a minute or so to see if bitterness ensues then spit it out completely. Bitter boletes not only are unpleasant to the taste but can have negative gastrointestinal consequences.

The edible bolete will have no bitterness but have a neutral to pleasing flavor and is fine to cook. Boletes can get a little gooey when cooked so many folks like to slice and dehydrate boletes to add to various food dishes. A variety of boletes are also known as porcini or king boletes that are found mainly in the Northwest U.S. and in Europe.

In doing some research I have found that there is much disagreement among mushroom “experts” about toxicity but in North America it is said that none will kill or harm you but who wants to get sick to their stomach? It’s best to avoid Boletes that are orange capped or with Red or orange pore surfaces.

Remember to consult with a local expert who can positively identify them and give advice about edibility and perhaps cooking methods.